For tonight's scheduled writing slot, I was looking through an old written journal for writing ideas, and I came across some advice for starting a podcast. One of the items in the list was:

I think that's great advice if you have everything lined up, have learned all the lessons you need to learn, and have developed the habits to succeed. That's where that falls down, though: that advice was from a journal entry I wrote in 2019. Guess how many podcast episodes I've published since then?

Just. Start. Do. Go. I have two novels that are partially completed. The second one was started in 2003, the year my first child was born. The first one was started about ten years earlier. I started the second one, because I thought that the first one was too ambitious, so I wanted to get some other writing under my belt before completing that first one. If I continued at that rate, I would need to live multiple centuries to complete my first novel.

This blog you are now reading is in part a result of my wanting to return to both of those. I shared some of what the "in progress" novel is like on an earlier blog attempt, but my problem was that I did not keep writing. I have put to word processor perhaps 1/3 of the story, and I've outlined the entire thing, but the last meaningful work was done in 2016—six years ago, as of this writing.

When I started this blog, I wanted to be a writer about self improvement, financial success, and moving forward. That may still be what this becomes, but I would be remiss if I limited myself only to the individuals who inspired me to act over the years. I love the idea of motivating people, of giving them tools to rise above their status quo and forge the destiny that lies within them.

You are my density

Perhaps that is not my own destiny. I have many other things beneath my surface. To the earlier point, "Know your brand," I do not expect to simply write about "anything" and expect it to create a successful following—that sort of thing only works for people who have already gained a following for some other reason. I know that I will come to focus on one area and make that the wellspring of ideas and connections that builds to something that people want to share in. However, I am also someone who loves writing, communication, public speaking, computer programming, and teaching. It may be that I find more of a voice in one of those other areas.

However, I will not do any of that before I develop a habit of writing. 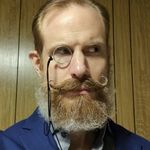 I’ve learned a great many excellent lessons that I’ve heretofore failed to apply. Here is where that changes. Follow me on my journey from corporate drudge to fully realized human.
Manchester, NH, USA
Previous Post
Next Post